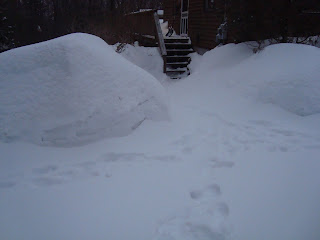 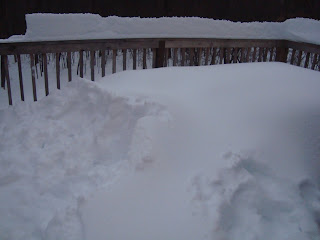 With the phenomenal snow we've been having, our walkway is little more than a tunnel to creep through on our way to snowblow the driveway or sled down our backyard hill.

It has its pros and cons--though for the children it is pure delight. I've been sitting looking out the window at the mounds of white thinking about abundance, the infinity of snowflakes that make up the feet of snow we now have, an impossibility of counting or even conceiving.

When I first became pregnant with my third child, a number of people (including friends) were amazed. "Three!" they'd say, as though I had announced my twentieth pregnancy.

There is a sense, at least here in our neck of the woods, that three is a LARGE family (and by local standards, it is). There is much in that to appreciate, a sense of abundance, a plethora of children, a gaggle, a gang, a brood. (Now when people call and leave messages they say: "We hope you and your gang are doing well.) We are nowhere near having a sports team of any kind, and compared to a true large family, ours is indeed small, but I take pride (not insult) in the quality of abundance that comes from having an "extra" child. To have him, in addition to my older two, is to be rich in children.

It is this sense, when I look out at the snow, that in God's creation, in the language of the Divine, the communication of Universal Goodness and Love, no lack exists. To the contrary, there is nothing but plenty--and I do not mean plenty of ill, bad, and trouble. All that we need is given to us, in fact, MORE than we need.

I do not want anything for anyone else save what they want (which is to say I think all people ought to have the size family their heart desires, be it no children, one, two or several). What would be lovely is for each of us to feel the plenty around us, to feel there is as much love available as snow (as sun on a sunny day), that our cup is running over in streams of plenty, that we are knee deep in goodness, that the walkway-- our path in this world--is a tunnel, with God's hands cupped around us, a light ever before us.
2 comments:
Newer Posts Older Posts Home
Subscribe to: Posts (Atom)