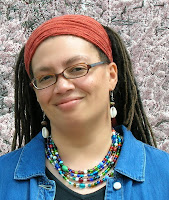 Ah, content at last. What we've all been waiting for.
I'm part of the Girlfriend's Cyber Circuit--essentially cool women who write. My "guest" today is one of those excellent ladies, Carleen Brice. So excellent in fact was her first novel, ORANGE MINT AND HONEY, that it won the 2009 First Novelist Award from the Black Caucus of the American Library Association and the 2008 Break Out Author Award at the African American Literary Awards Show. It was also optioned by Lifetime Movie Network, and no, in case you're wondering, I'm not at all envious. That would be unseemly. 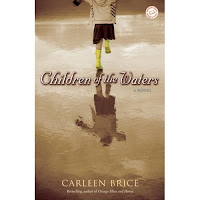 Her latest release, CHILDREN OF THE WATERS, is the "story about race, love, family & identity. As someone else put it, 'issues fiction.' Two women, 1 black and 1 white, discover they are related and the story deals with how that impacts both their lives."
Here's what Carleen had to say about the book, motherhood and writing.
ME: How did you come up with the idea for this book?
CARLEEN: The idea came from a story my sister-in-law told me. She’s biracial and was given up for adoption and raised by a white family. Her birth sister, who’s also white, found her when they were adults. I wondered what would happen if she had been adopted and raised by a black family.
ME: How does motherhood appear (or not appear) in your novel?
CARLEEN: Motherhood is quite important to this story. Billie, one of the 2 protagonists is pregnant. The other protag, Trish, is looking at having an empty nest soon as her son is a teen. And both women deal with the repercussions of having lost their biological mother. Billie’s adoptive mother plays a key role. So motherhood comes up a lot.
ME: What's been your own experience of mothering? (Giving it, receiving it, etc.)
CARLEEN:I don’t have children. I had 2 miscarriages, so my experience around mothering is one of loss. My first novel Orange Mint and Honey also deals with mothering—it’s about a mother-daughter relationship. My mother was very important in my life, though we sometimes had a difficult relationship.
(Editor's note: I'm sure that hasn't happened to ANYONE else in the world.)
Here's what some other writers are saying about the book:
“I was exhausted and singing the blues the hour I began Carleen Brice’s new novel,
CHILDREN OF THE WATERS. Five hours later, I’d finished this fresh, free-rein novel about mothers’ secrets and children’s sorrows and was shouting ‘Hurray!’”
—Jacquelyn Mitchard, author of The Deep End of the Ocean
“In CHILDREN OF THE WATERS, Carleen Brice deftly explores issues of family, identity, and race with a wonderful abundance of humor, forgiveness, and grace.
This moving story of two sisters separated by prejudice will open minds and touch hearts.”
—Meg Waite Clayton, author of The Wednesday Sisters
“In CHILDREN OF THE WATERS, Carleen Brice manages to explore the difficult, messy and unpleasant details of life with both humor and wisdom. The parallel journeys of sisters, Trish and Billie, will resonate with everyone and anyone who has questioned their identity and place in this world. Once again, Carleen Brice has crafted a thoroughly enjoyable novel that gets at the heart of the human experience.”
—Lori Tharps, author of Kinky Gazpacho
She is at work on her third novel, Calling Every Good Wish Home, and she maintains the blogs “White Readers Meet Black Authors” http://www.welcomewhitefolks.blogspot.com/ and "The Pajama Gardener" http://www.pajamagardener.blogspot.com/.