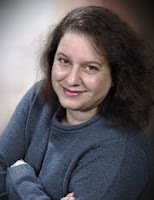 I've got another GCC novelist "visiting" today. Marilyn Brant's debut novel has just come out. Since I've just had my first novel released, I know what an exciting, hair-raising time it is. Not that this lady needs my help. Kelly Moran of Bookpleasures wrote, "This was a truly, irrevocably inspiring novel." Could praise get much better than that? Marilyn is also a mother. Which makes her very cool indeed to me. See below for all the great stuff she has to say about motherhood and writing.

The book: ACCORDING TO JANE. Another wonderful cover.

And the interview:
Tell us about your latest release and the inspiration behind it.
My debut novel, According to Jane, is the story of a modern woman who--for almost two decades--has the ghost of Jane Austen in her head giving her dating advice. I first read Pride & Prejudice as a high-school freshman. Like my heroine Ellie, I raced through the novel way ahead of the reading assignments. I loved both the story and Austen’s writing style immediately. Her books changed the way I perceived the behavior of everyone around me, and I spent the rest of freshman year trying to figure out which Austen character each of my friends and family members most resembled! Also like Ellie, I had a few (okay, a lot) of less-than-wonderful boyfriends, and I would have loved to have been given romantic advice from the author I most respected and the one who’d written one of my all-time favorite love stories.

How do you balance your mothering and your writing?
This is an ever-evolving challenge. As my son has gotten older, he's been able to do many simple things independently that I'd had to help him with a few years ago (i.e., pour a bowl of cereal for himself, get dressed on his own, etc.), but he now needs to go to new activities like cross-country practice or swimming lessons or youth-group services that he wouldn't have attended previously. I need to shift the way I do my work to accommodate his schedule--sometimes editing in the car while waiting for him, often just putting off my tasks until he's asleep or occupied doing something of his own at home.
How do mothers show up in the novel?
My heroine's mother is very much a tangential character in the story. Since I parallel Austen's Pride and Prejudice to some extent, my heroine's mom has a touch of the rather frivolous "Mrs. Bennet" about her (the mother of P&P's leading lady, who was an insatiable in her pursuit of suitors for her daughters). In my second novel (due out in October 2010), all three of the main characters are moms, and the act of motherhood plays a far greater role in that story.
Has being a mother changed how you write?
LOL--being a mother has changed how I do everything, Sam! I became a writer largely *because* I became a mom. I felt it was critical for me to pursue my passions as a parent and to set an example of doing this for my child. I didn't want--not even for one moment--to have my son feel I was living my life through him. More specific to writing itself, I feel so much compassion for the mothers in my books! For the choices moms have to make, the time and energy motherhood requires, the tremendous love we feel for these beautiful little beings... Being a mother has been the best part of my life and, also, the biggest growth experience (*grin*).
(I, for one, no nothing of growth experiences. Actually, motherhood has helped me to grow into a much bigger person. Around.)
Marilyn's book is out today, hot off the presses. Can't wait to read it. You can find out all about her at: http://www.marilynbrant.com.