Save The Happy Mother! 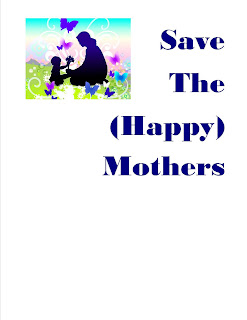 I read this article today in the Puffington Post and it alarmed me so much that I am starting my own  campaign to save the happy mothers. Read the facts below. I think you'll agree that this is a pressing (and depressing) problem we all need to immediately address.

The latest news from the Hew Center for Public Research indicates a alarming reduction in the number of happy mothers. The numbers have declined so significantly over the past decade that studies suggest only one hundred such mothers are left in existence. This means, for the first time in human history, the happy mother has become an endangered species.

"How can this be?" asks researcher Pilly Fussle of Serious University, home to the Mother Think Tank, Yo, Mama. "Truthfully, none of us are surprised. For nearly a century, maternal satisfaction has been in steady decline. Women continue to become mothers, but the existence of the happy mother occurs less and less often."

In order to locate happy mothers, a team of fifty researchers had to search the globe for six months. "We found the fewest number of Happy Mothers (HM) in the U.S.," says Fussle. "The greatest number live in Australia."

But Yo, Mama only studies the existence of such mothers. They refuse to draw conclusions as to the reasons. For that, you have to turn to sociologist and psychologist Bernafrette Muddleton, the preeminent doctor of theories of human endangerment. "There's a lot of pressure to be a happy mother," wrote Muddleton in a official press release. "What's so funny about poopy diapers, fear of kidnapping, teenage drinking and laundry? Nothing. That's what. I haven't been a happy mother since my children weren't born. The only truly happy mother I know had a lobotomy." Later, she retracted her statements, explaining that she'd forgotten to take her anti-depressant that morning and that none of her conclusions had to do with her findings as a professional.

"Motherhood can be isolating, dehumanizing, exhausting and confusion," said the famous novelist of mother fiction, Samantha Wilde. "This is a cultural problem that demands a cultural solution. Happy motherhood isn't an impossibility. Motherhood contains a preponderance of joy. What needs to change is our definition of the successful life. Devoting at least some of our years to nurturing children is in the best interest of the whole human community; mothers need to be elevated and supported. When that happens, the happy mother will roam free on the planet."

Other mothers didn't express such a positive attitude or use four syllable words to show off. "Who has time to be happy?" said mother of four Ruru Newstick. "I don't even have time to read your silly article." Said Oprah, "This is a national tragedy. And I'm really glad I never had any kids myself. Because I like being happy. It really sells my magazine."

In the wake of the shocking news, a Nebraska mother of twelve, Sunester Sunnyside, has created an organization called, Save The Mothers, that has already raised a million dollars, proving that, while they might not be a happy people, no one gets more done than a busy mother.

We asked Sunnyside if she's one of the few HM alive today. "I am," she told the Puffington Post in an exclusive interview that lasted six hours on account of her being constantly interrupted by her multitude of children. What's the secret to her joy? "Kids are fun," she said while nursing. "I laugh with them. I lowered my expectations about other stuff, a clean house, professional success, material wealth. We spend lots of time together just playing. I also taught my children to pick up after themselves. My husband supports me. And when it gets rough, I take a time-out in my bedroom, lock my door, and eat a bon-bon. It's a good life. Children bring out the care-free child-like side in me. I skip and hug and kiss and cry every day. What other adult can say that?"

Sunnyside confirmed her status as the exception by serving the entire Puffington Post media time home-squeezed lemonade and brownies her teenagers made. She seemed virtually unbelievable. "Look," she said, "go see how dirty my bathroom is. We all have to make choices, set priorities. I can't wait to help other mothers reclaim their natural joy."

To accomplish those efforts, Sunnyside is using the funds raised to start a Happy Mother Commune where families will live together and share childcare responsibilities. "You know why a mother is depressed? Because she can't leave her house to buy a stick of butter without an ordeal! Freedom and joy will come with community, connection, and sharing the burden. Now, if you don't mind, I need to go change a diaper." To reach Sunnyside, drive to Nebraska. She doesn't get internet yet.